Today we meet Shannon Diener of Elephant-Human Relations Aid (EHRA). EHRA is an organization based in Nambia that strives to conserve desert elephants by building peaceful relationships between the elephants and local communities. Shannon is the Manager of the EHRA PEACE Project, the EHRA’s education and training program.

How are desert elephants different from other kinds of elephants in Africa?  Are they found only in Namibia?

They appear taller than their inland counterpart, but this is just because they are leaner due to less food in the desert, and they have bigger feet due to many years of walking over sand. However, this is not a morphological difference.

Their knowledge of how to survive in these harsh desert conditions is key. This also means that if those elephants were to go locally extinct, it would be very challenging to replace them with other elephants that have not learned the knowledge essential for survival in the desert.

Apart from Namibia, desert-dwelling elephants occur in only one other place on earth, in Mali, and there they are called the Gourma elephants.

How many elephants are there in Namibia, and what conservation challenges do they face to their survival?

Shannon: The Ministry of Environment, Forestry and Tourism states that there are close to 24,000 elephants in total in Namibia. However, most of the elephants are transboundary meaning they constantly migrate between Namibia, Angola, Zambia and Botswana and this makes it difficult to say for sure how many elephants are resident. Many conservationists estimate close to 5700 resident elephants in Namibia.

The desert elephants occur only in the north-west of the country and they walk in dry riverbeds. Those riverbeds have big trees throughout the year that provide food and shade for the giants. The elephants drink from natural springs and man-made water points.

In the early 1900s it was estimated that there were 2500–3000 desert elephants living in Namibia. Today, less than 200 desert elephants survive. This is mostly due to heavy poaching activity and hunting expeditions. Now, human-elephant conflict drives the vulnerable and unique subpopulation of desert elephants further into decline.

What is Human-Elephant Conflict?

Shannon: Human-elephant conflict is a negative interaction between people and elephants.

Human-elephant conflict is mostly a result of habitat loss and fragmentation because of an increase in human populations. Conflict takes the form of crop raiding, damage  to water storage facilities (tanks, pumps, pipes), injuries to humans and, occasionally, death caused by elephants.

In response to these conflicts elephants are then removed or killed by humans. The root cause of the problem is often an immense fear of elephants and frustration over the continuous damage that makes living with elephants very hard.

What is EHRA and how and why was your organization formed?  How is EHRA working to solve Human-Elephant Conflict?

Shannon: EHRA, short for Elephant-Human Relations Aid, is a non-profit organization that was established in 2003. Here is the background: During the violent struggle for Namibia’s independence, poaching of elephants (and other game) was at its most extreme. The last surviving desert elephants fled the region.

After independence, when conditions were favorable, the elephants returned to their native land. By this time, however, an entire generation of people had grown up WITHOUT elephants as neighbors. So most people did not know what an elephant was, what it ate (some were afraid elephants ate people!) and how to coexist with them.

So residents of villages in north-western Namibia asked the government to kill or move the elephants from the area because they could not cope with the emerging conflicts and they were utterly frightened by these 6-ton animals.

Those that had invested in tourism, however, started a petition to plea for the elephants to stay as they fulfil an essential role in the ecosystem but also are an enormous attraction for tourists.

EHRA was then founded by a group of very passionate people that believed that the problem between people and elephants can be fixed. It was a rough start! As finances were very limited, EHRA asked for international volunteers to come to Namibia and help EHRA to protect water storage facilities by building a sturdy stone wall around it. The volunteers are EHRA’s core funding and manpower!

Ever since, we hosted over 3000 volunteers that helped us build over 300 walls to protect water tanks, pumps and pipes from elephant damage. Elephants can still drink at elephant dams or springs, but don’t pose a big threat to people anymore. This made people much happier.

Apart from providing practical solutions for conflicts to communities, EHRA also conducts research on the elephants: where they walk depending on seasons, where most conflicts occur, how many there are and how they interact with other populations.

We also educate and train communities: School children, youth, farmers, elders and traditional leaders. This project is called the PEACE Project and stands for People and Elephants Amicably Co-Existing.

Often, people fear the unknown. The more they understand elephants, what their behavior means and how to interact in a safe way with them, the more people feel empowered. With the learned knowledge and skills people can now choose wisely when they find themselves in an encounter with elephants.

Are you hopeful that your work is having positive results, and how will you know that the problems are getting solved?

I joined EHRA as the PEACE Project Manager in February 2020, and I have frequently been getting calls from community members asking us to give a training in their village on how to safely co-exist with elephants.

In our main area of operation, which is along the Ugab River, the majority of the people believe in conserving the elephants and are looking for long-term sustainable solutions to peacefully coexist with the elephants.

There is a definite change in attitude.

When EHRA started we not only had more complaints, but people were determined to “get rid” of the elephants. There was no empathy for elephants, no understanding of their social bonding and no knowledge on the population size. This was true from the elders all the way down to young school children. Elephants were the enemy and they must be removed.

Once the importance and the increased vulnerability of the elephants was understood, the conservancy leaders chose to defend their elephants and ask for special protection. We consider this complete turnaround in local attitudes a success of our hard work.

Shannon: Conservation lies in the hands of the next generation all over the world. What they can do is to educate themselves on conservation issues in Africa and elsewhere. They can then share what they have learned with their friends and family.

Another thing they can do is to raise funds and donate towards a conservation charity. This can be fun! Baking and selling cakes or muffins during a school market whilst raising awareness about a certain endangered species, running a marathon for conservation, selling your art and donating the proceeds to a charity … there are so many ways to help!

Non-profit organizations do not make their own money and all the funds they are able to secure all go towards conservation and ensuring that our planet’s beautiful species are here for a long time into the future.

Our message to the young people is:

You are inheriting a world that was deformed by the generations before us. Conservation is not just about saving one particular species from extinction. Conservation is about conserving the functioning of a global ecosystem that created all that we know and that we totally depend on for our own survival. And every living being, every species of animal or tree, has its own vital role to play within this ecosystem.

The nature around us lives within us. When we harm our environment, we ultimately harm ourselves. This is backed by science, our own experiences and ancestral wisdom.

Be brave and stand up. Read up on facts, think about what you can do. Raise your voice for those that cannot speak for themselves (e.g. elephants!).

Form conservation working groups, talk about conservation issues on social media or organize marches for endangered species. Understand how your daily actions can contribute to make this world a better place.

Always remember: We all need to be working to save the delicate and complex web that supports life on earth, our only home. What will your part be?

Looking for more about elephants? 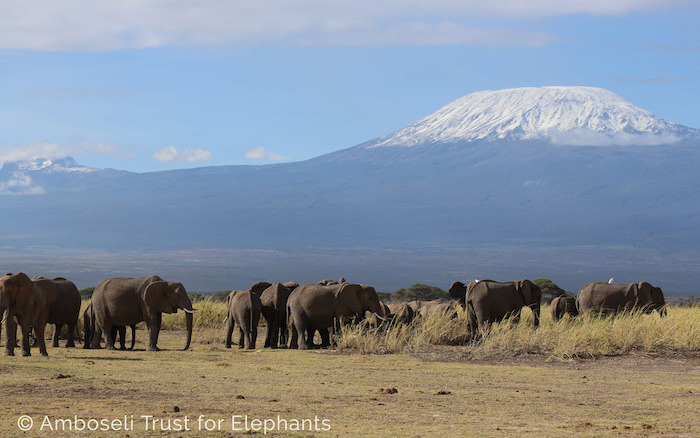 We chat to Phyllis Lee about the Amboseli Elephant Trust's longterm study of elephants.
Read More ...

How to draw an elephant, giraffe & rhinoceros

Unseen stars of the plant and animal world

Activity: What makes a mammal?