Some people claim that Bigfoot roams through the forests of Northern California.

For hundreds of years people have told stories of seeing large reptilian creatures swimming in Lake Champlain in Vermont.  Despite many sightings and legends, nobody has found real scientific evidence that these creatures actually exist in the forests and lakes of North America.

There is real scientific evidence though that there was a giant creature that lived in both the lakes and forests of North America.  This creature’s scientific name is Castoroides ohioensis.  This creature is also known as the giant beaver.  It was the largest beaver that ever lived.  It grew up to eight feet long and weighed nearly 500 pounds.  It was as big as a black bear.

Where The Giant Beaver Roamed

The giant beaver lived in many parts of North America.  It is known only from its bones because it went extinct at the end of the last ice age about 12,000 years ago.  This period is known as the Pleistocene.  The bones of the giant beaver were first discovered in Ohio. This is why it is named “ohioensis.”

Food and Lodging of the Giant Beaver

Modern beavers live in homes called lodges.  Lodges are domed houses that beavers build out of logs, sticks, and mud.  Scientists are not sure what kind of homes the giant beavers built, but Dr. Yansa has one idea.

“Although we have no proof, giant beaver probably didn’t build lodges. Their biology (their diet and the shape of their tail) suggest that they were more like giant muskrats and may have had excavated dens rather than built lodges. But again, we have no proof either way.”

Why Are There No Giant Beavers Today?

Nobody knows for sure why giant beavers went extinct.  Many large animal species in North America and other parts of the world went extinct at the same time that the giant beavers did including mammoths, saber-toothed cats, and giant sloths.  Some people think that humans hunted these species to extinction.  Other people think that changes in ecosystems that these animals live in may have caused their extinction.  It is possible that these species went extinct for a combination of reasons including hunting by humans and changes in their habitats.

Sadly, there are no giant beavers left swimming in the lakes or roaming through the woods of North America.  Unlike Bigfoot though, we can be sure that the Giant Prehistoric Amphibious Beast of Ohio was real.

*This article originally appeared on kidsnews.mongabay.com 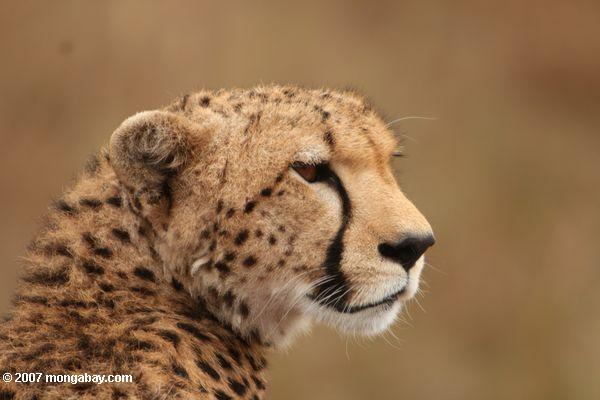 The cheetahs of America?